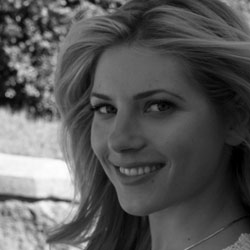 Born and raised in Etobicoke, Canada, Katheryn Winnick trained extensively in the martial arts growing up. She currently holds a third-degree Black Belt in tae kwan do, a second-degree Black Belt in karate and is a licensed bodyguard. Before moving to Los Angeles, Katheryn studied acting in New York City, and in 2003 she was selected from among thousands of young actors to be documented as one of the next ones to have “it” in Bravo’s groundbreaking series ‘The It Factor'.

Currently Katheryn stars in  in  ”Love And Other Drugs,” with Anne Hathaway and Jake Gyllenhaal, directed by Ed Zwick.

Katheryn appears opposite Paul Giamatti in the dramatic comedy “Cold Souls”, which had its world premiere at the 2009 Sundance Film Festival. She also recently finished shooting the lead in Oscar-winner Rob Legato’s directorial debut Choose (opposite Kevin Pollak and Bruce Dern), and has appeared in several studio movies, such as “Killers” (starring Ashton Kutcher and Katherine Heigl, directed by Robert Luketic), Paramount Pictures’ “Failure To Launch” (with Matthew McConaughey), “50 First Dates” and “Two Weeks Notice.”

On the small screen, Katheryn has guest-starred on such hit shows as House, CSI: NY, Law & Order and Oz. She is currently doing a 10 episode arc on Bones.