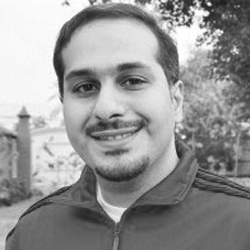 Sultan Saeed Al Darmaki is in his thirties and hails from Abu Dhabi in the United Arab Emirates where he has lived, studied and worked all his life, however Sultan is no stranger to wanderlust and has travelled to many different places around the world such as London (which he describes as his second home) Paris, Amsterdam, Milan, San Francisco, New York, Hong Kong, Singapore & Bangkok. He plans to visit many more places in the future.

Because of his travels, he has developed an interest in people, arts & culture as well as being inspired to take up writing, photography and other forms of expressions that help satisfy both his inquisitive nature and wild imagination. Thanks to his protean behaviour and open-mindedness, he has become a modern day renaissance man.

He studied at the International School of Choueifat  and graduated with a High School Degree in Arts in 2001, he continued his studies in Abu Dhabi at the Higher Colleges of Technology and finished with a Higher Diploma in Business Administration in 2005. His first job was working as a customer service officer in a bank, months later he went on to work as an Employee Relations officer in an oil & gas company.

Feeling that he was not satisfied with his academic standing, he enrolled in the New York Institute of Technology in Abu Dhabi and graduated with a Bachelor’s Degree in Human Resource Management (with Honour plus Distinction) in the summer of 2008.

In the next 3 years he worked as a Compliance Officer in a sovereign wealth fund and as a Risk Officer in the UAE’s nuclear power program. In the end of 2011 he retired from the public sector and took over Al Darmaki Group which was started by his father, the late H.E. Saeed Sultan Al Darmaki in the early 80′s and managed by his mother for the past 20 years.

In addition to being the Chairman and Managing Director of a group that consists of more than 12 companies in multiple business sectors, Sultan is also a writer, photographer and is currently looking into the film production prospect.

He published his first book “Leave the Birds Alone” in November 2012 which is a collection of his witty thoughts on many things in life such as love, money, humanity, friendship, entertainment and social matters.

His love of arts has inspired his latest initiative which is to support independent and emerging artists around the world in the field of films, literature, visual arts, photography and music. He does this by funding many projects on Kickstarter (a major crowd-funding website), establishing prizes for festivals and sponsoring multiple events.

Founded by Sultan Saeed Al Darmaki in August 2013, Dark Dunes Productions is an Abu Dhabi based film production company that produces Horror, Sci-fi and Fantasy films on an international level and will get itself involved as a key player in the global film community especially in those genres mentioned.

Oh by the way…he loves cats