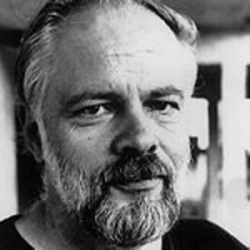 Philip Kindred Dick (December 16, 1928 – March 2, 1982) was an American novelist, short story writer, and essayist whose published work during his lifetime was almost entirely in the science fiction genre. Dick explored sociological, political and metaphysical themes in novels dominated by monopolistic corporations, authoritarian governments, and altered states. In his later works, Dick’s thematic focus strongly reflected his personal interest in metaphysics and theology. He often drew upon his own life experiences and addressed the nature of drug abuse, paranoia and schizophrenia, and transcendental experiences in novels such as A Scanner Darkly and VALIS.

The novel The Man in the High Castle bridged the genres of alternate history and science fiction, earning Dick a Hugo Award for Best Novel in 1963. Flow My Tears, the Policeman Said, a novel about a celebrity who awakens in a parallel universe where he is unknown, won the John W. Campbell Memorial Award for best novel in 1975. “I want to write about people I love, and put them into a fictional world spun out of my own mind, not the world we actually have, because the world we actually have does not meet my standards,” Dick wrote of these stories. “In my writing I even question the universe; I wonder out loud if it is real, and I wonder out loud if all of us are real.” Dick referred to himself as a “fictionalizing philosopher.”

In addition to 44 published novels (as of January 2010), Dick wrote approximately 121 short stories, most of which appeared in science fiction magazines. Although Dick spent most of his career as a writer in near-poverty, nine of his stories have been adapted into popular films since his death, including Blade Runner, Total Recall, A Scanner Darkly and Minority Report. In 2005, Time magazine named Ubik one of the one hundred greatest English-language novels published since 1923. In 2007, Dick became the first science fiction writer to be included in The Library of America series.

Dick sold his first story in 1951. From that point on he wrote full-time, selling his first novel in 1955. The 1950s were a difficult and impoverished time for Dick. He once said, “We couldn’t even pay the late fees on a library book.” He published almost exclusively within the science fiction genre, but dreamed of a career in the mainstream of American literature. During the 1950s he produced a series of nongenre, non-science fiction novels. In 1960 he wrote that he was willing to “take twenty to thirty years to succeed as a literary writer.” The dream of mainstream success formally died in January 1963 when the Scott Meredith Literary Agency returned all of his unsold mainstream novels. Only one of these works, Confessions of a Crap Artist, was published during Dick’s lifetime.

In 1963, Dick won the Hugo Award for The Man in the High Castle.[5] Although he was hailed as a genius in the science fiction world, the mainstream literary world was unappreciative, and he could publish books only through low-paying science fiction publishers such as Ace. Even in his later years, he continued to have financial troubles. In the introduction to the 1980 short story collection The Golden Man, Dick wrote: “Several years ago, when I was ill, Heinlein offered his help, anything he could do, and we had never met; he would phone me to cheer me up and see how I was doing. He wanted to buy me an electric typewriter, God bless him—one of the few true gentlemen in this world. I don’t agree with any ideas he puts forth in his writing, but that is neither here nor there. One time when I owed the IRS a lot of money and couldn’t raise it, Heinlein loaned the money to me. I think a great deal of him and his wife; I dedicated a book to them in appreciation. Robert Heinlein is a fine-looking man, very impressive and very military in stance; you can tell he has a military background, even to the haircut. He knows I’m a flipped-out freak and still he helped me and my wife when we were in trouble. That is the best in humanity, there; that is who and what I love.”

The last novel written during Dick’s life was The Transmigration of Timothy Archer. It was published shortly after his death in 1982. In 1972, Dick donated manuscripts, papers and other materials to the Special Collections Library at California State University, Fullerton where they are archived in the Philip K. Dick Science Fiction Collection in the Pollak Library. It was in Fullerton that Philip K. Dick befriended budding science-fiction writers K. W. Jeter, James Blaylock, and Tim Powers.

On February 20, 1974, Dick was recovering from the effects of sodium pentothal administered for the extraction of an impacted wisdom tooth. Answering the door to receive delivery of extra analgesic, he noticed that the delivery woman was wearing a pendant with a symbol that he called the vesicle pisces. This name seems to have been based on his confusion of two related symbols, the ichthys (two intersecting arcs delineating a fish in profile) that early Christians used as a secret symbol, and the vesica piscis. After the delivery woman’s departure, Dick began experiencing strange visions. Although they may have been initially attributable to the medication, after weeks of visions he considered this explanation implausible. “I experienced an invasion of my mind by a transcendentally rational mind, as if I had been insane all my life and suddenly I had become sane,” Dick told Charles Platt.

Throughout February and March 1974, he experienced a series of visions, which he referred to as “two-three-seventy four” (2-3-74), shorthand for February-March 1974. He described the initial visions as laser beams and geometric patterns, and, occasionally, brief pictures of Jesus and of ancient Rome. As the visions increased in length and frequency, Dick claimed he began to live a double life, one as himself, “Philip K. Dick”, and one as “Thomas”, a Christian persecuted by Romans in the 1st century A.D. Despite his history of drug use and elevated stroke risk, Dick began seeking other rationalist and religious explanations for these experiences. He referred to the “transcendentally rational mind” as “Zebra”, “God” and, most often, “VALIS”. Dick wrote about the experiences in the semi-autobiographical novels VALIS and Radio Free Albemuth.

At one point Dick felt that he had been taken over by the spirit of the prophet Elijah. He believed that an episode in his novel Flow My Tears, the Policeman Said was a detailed retelling of a story from the Biblical Book of Acts, which he had never read.

Philip K. Dick died in Santa Ana, California, on March 2, 1982. He had suffered a stroke five days earlier, and was disconnected from life support after his EEG had been consistently isoelectric since losing consciousness. After his death, his father Edgar took his son’s ashes to Fort Morgan, Colorado. When his twin sister Jane died, her tombstone had both their names carved on it, with an empty space for Dick’s death date. Brother and sister were eventually buried next to each other.

Dick married five times, and had two daughters and a son; each marriage ended in divorce.