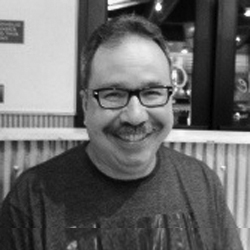 Victor Grippi is a writer of both computer software and screenplays. By day he helps create platforms that power today’s computing. The rest of the time he follows his love of science fiction by creating stories he hopes to see on the big screen. His background in technology offers him a unique perspective on the character driven science fiction stories he writes. Stories range from what it means to be human in an ever evolving technological society, to speculative stories where current technology is taken one step further, and grounded stories of how we will deal with first contact on a human level. Many of the same themes Philip K. Dick dealt with in his writing.

Victor received his film education from UCLA where his science fiction script Divergence was a top ten finalist in the annual screenplay competition and went on to win the Nevada Film Festival. Radio Free Albemuth is his inaugural producing debut and he is thrilled to be part of the amazing RFA team. Victor lives in Los Angeles with his biggest critic, his pet chihuahua named Scrappy.